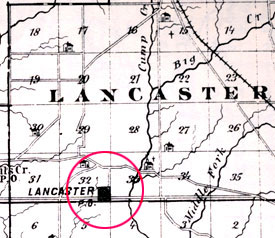 Located about 10 miles northwest of Madison, the small community of Lancaster, Indiana played an important role in Underground Railroad efforts in southern Indiana. Leaders of the local movement included Lyman Hoyt, Samuel Tibbitts, and James Nelson. Lancaster is also home to the Eleutherian College, which was built in the 1840s to educate men and women regardless of race.

The Lyman Hoyt house in Lancaster was the home to one of the founders of Eleutherian college and an active participant in the Underground Railroad. Diaries from his children highlight many of his UGRR activities. The Hoyt House is listed on the National Register and the Network to Freedom.
(Read the complete story)

This majestic, limestone building in Lancaster is Eleutherian College. The college was built by anti-slavery Baptists in the 1840s to educated men and women, regardless of race, in the same building--a rarity for the time. This building was also used for UGRR activities. Eleutherian College is a National Historic Landmark, listed on the National Register and the Network to Freedom.