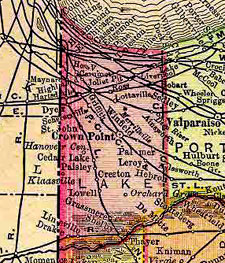 Lake County, located in the northwest corner of Indiana is bounded by Lake Michigan on the north, Porter County on the east, Newton County on the south and the state of Illinois on the west. The northern third of the county is heavily industrialized and has strong ties to the urban area of Chicago. The southern two thirds typify much of rural Indiana with rolling prairie and flatlands that are dotted with farms and small, rural communities.

In 1835, Porter County was organized and included the land that was to become Lake County. Lake County was officially organized into three townships in 1837. Public land sales started in 1839, although a number of settlers were living in the area as early as 1834.

The coming of the Michigan Central Railroad in 1850 marked the beginning of massive changes for Lake County. Increased transportation links to outside markets, including the rapidly developing Chicago area, ushered in an economic boom for the county's farmers. Communities such as Crown Point, Lowell, Hobart, Schererville, Munster, Highland and Griffith developed as thriving market towns for the area's agricultural economy area as well as its accessibility to railroad lines and Lake Michigan.

Between 1890 and the 1920s, scores of steel and associated industries developed. Inland Steel's plant in Indiana Harbor, Mark Manufacturing in East Chicago, Standard Oil in Whiting, Pullman Standard in Hammond and of course, U.S. Steel in Gary drew tens of thousands of workers to the region. These companies were responsible not only for the physical development of the area, but their influence on the region's political, social, religious and educational arenas was unparalleled.