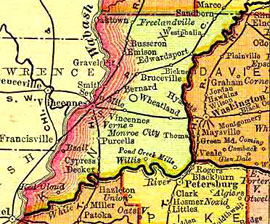 Knox County, located in south central Indiana along the Illinois border, was named for Revolutionary War General Henry Knox. Organized in 1790, Knox County is Indiana's oldest. Vincennes, the County Seat of Knox County, was also the capital of the Indiana Territory until it was removed to Corydon in 1812.

When Indiana’s capital was still in Corydon, the State Supreme Court met in southern Indiana. In 1820, the court heard the case of Lasselle V State. General Hyacinth Lasselle of Vincennes was sued by his slave Polly for her freedom. Lasselle had purchased Polly’s mother from Native Americans in the area before Indiana had become a territory or state. The Circuit Court of Knox County (in Vincennes) ruled in favor of Laselle, stating that Polly was still a slave. Polly and her lawyers appealed to the Indiana Supreme Court on the basis that when Indiana’s constitution was passed, it had an article in it prohibiting slavery.

The Supreme Court reversed the ruling and set Polly free. This is the first known legal case related to slavery in Indiana.