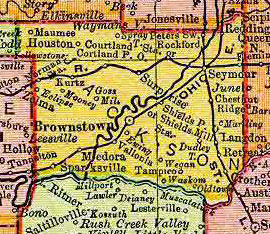 Jackson County, in south central Indiana, was founded in 1816 and named in honor of the seventh President of the United States, General Andrew Jackson.

In April 1860, Alexander McClure of Nashville, Tennessee shipped himself in a 2 foot by 3 foot box to the notorious Underground Railroad conductor Levi Coffin (who was then living in Cincinnati, Ohio). Placed in a box at 10:30 AM, he made the over 10 hour trip to Seymour, IN where he would have to change trains. In the process of moving his box, the train station employees dropped the box, and out came Alexander.

He was arrested and shipped to Louisville to await his owner. Federal law allowed for Alexander’s owner to claim his slave.

After the Civil War, Alexander stayed in Nashville until 1880, when his trail goes cold. More research is being done to determine what happened to Alexander and his three accomplices. (Read the complete story)