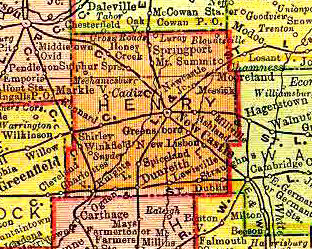 Seth Hinshaw (1787-1865) was active on the Underground Railroad, but also operated a free labor store in Greensboro. A free labor store only sold items which were produced without the help of slave labor. Instead of cotton and sugar the store might sell wool and maple syrup.

Along with this work, Hinshaw also erected “Liberty Hall,” which held the anti-slavery meetings, which Hinshaw ran. The last meeting of the abolitionists here was in 1852, but the building remained until 1880.

A large Quaker settlement, it was an active abolitionists and UGRR center in southeastern Henry County. Much of what is know about the area is thanks to the writings of Daniel Newby, the son of Thomas Newby, an active conductor.