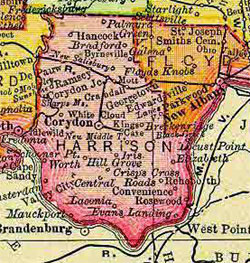 Harrison County Located just 15 miles west of Louisville, Kentucky, Harrison County, Indiana was named for General William Henry Harrison, First Territorial Governor of Indiana who later became the 9th President of the United States. On May 1, 1813, the capital of the territory was removed from Vincennes to Corydon and the original stone building used as the Capitol Building still stands.

Oswell was born in Maryland around 1800 and died in 1875. In September 1857, a slave named Charles disappeared from Brandenburg, KY after he had left word that he was going across the Ohio River to fish. Charles’ owner frequently allowed him to go to Indiana to fish, so this event would not have been noteworthy, except for the fact that Charles was never seen again.

Charles’ owner posted a reward for him and began looking for him in Indiana. Through investigation, Oswell Wright, who lived in Corydon, was accused of assisting Charles. A Mrs. Withers had gained Wright’s confidence and he told her of Charles’ escape; Mrs. Withers turned Charles in for the reward money.

Wright and his accomplice, David Bell, were arrested and taken to Kentucky. After six months in jail, relatives of Bell came to Kentucky with guns to break the men out of jail. The Bell men all returned to Indiana without incident, but Wright was not at the same jail as David Bell, so he was not rescued.

Wright was tried for the crime of “assisting slaves to escape” in 1859 and was sent to a Kentucky State Penitentiary for five years.

When Indiana’s capital was still in Corydon, the State Supreme Court met in southern Indiana. In 1820, the court heard the case of Lasselle V State. General Hyacinth Lasselle of Vincennes was sued by his slave Polly for her freedom. Lasselle had purchased Polly’s mother from Native Americans in the area before Indiana had become a territory or state. The Circuit Court of Knox County (in Vincennes) ruled in favor of Laselle, stating that Polly was still a slave. Polly and her lawyers appealed to the Indiana Supreme Court on the basis that when Indiana’s constitution was passed, it had an article in it prohibiting slavery.

The Supreme Court reversed the ruling and set Polly free. This is the first known legal case related to slavery in Indiana.