Hamilton County, just north of Indianapolis in central Indiana, was named for Alexander Hamilton, one of the Founding Fathers. Hamilton County was very active in the Underground Railroad. According to one source, Westfield, a town in Hamilton County, was responsible for the freedom of more slaves than any other town in northern Indiana. 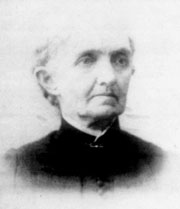 While doing research in the diary of Martha White Talbert, researchers found mentions of UGRR events associated with her family.

May 16, 1860: A family of the Kentucky refugees is here at present, seeking home in our free country. Free, I say, I wish it were so in every sense of the word. But never will it be so while our neighboring states resound the sigh of the bondsman. Bear husband and brother M.C. [Micajah C. White] have gone to the Chicago convention.

The execution of John Brown on Dec. 2, 1859 takes up two pages in Martha Talbert’s diary.

Micajah White was born in North Carolina in 1819 to a family of Quakers with strong abolitionist leanings. His father’s sister married Levi Coffin, the most famous conductor on the Underground Railroad. The White family moved from North Carolina to Milford, Indiana, in 1827. In 1833, the Whites were founding members of the Spiceland Quaker Meeting and in 1838, at the age of 19, Micajah was appointed recorder of Meeting Minutes. After the 1843 assault in Pendleton of Frederick Douglass (see Madison County), Micajah’s life changed.

Micajah or “M.C.” as his family called him, was living on the outskirts of Westfield in 1845 and decided to join the newly formed Anti Slavery Meeting in Eagletown. This was a group of dissident Quakers who felt they needed to take a proactive stance to end slavery. M.C. was disowned by the Spiceland Meeting for joining them.

The only story that survives about M.C. work is from around 1850 and is about an enslaved woman who reached Westfield just a step ahead of slave hunters. M.C.’s mother, Louisa, owned a tavern and the fugitive was placed in hiding there just as the slave hunters walked in and asked for a drink and lodging. Mrs. White calmly served them and then dressed the fugitive woman in some of her own clothes, including a large bonnet. The two women walked past the men and to M.C.’s house, where the woman was helped on her way.

Through other circumstances, M. C. is recognized as a key figure in the local anti slavery movement. His uncle, William Bundun, died in 1855. After making bequeaths to his wife and children, Bundun’s will read, “I direct also that the sum of 100 dollars when collected be placed in the hands of Micajah C. White or Aaron V. Talbert for the purpose of aiding or assisting destitute fugitive slaves on their way in making their escape from slavery to a land of Liberty to Canada.”