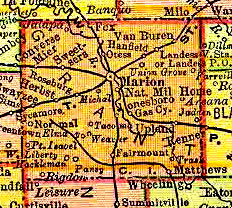 Grant County, located in the northeastern Indiana, was named after Captain Samuel Grant and Moses Grant, two Kentuckians who died battling Indians in 1789. The county was organized in 1831and Marion, the county seat, was laid out in the same year. Grant County has a strong Quaker heritage and was a hot bed of abolitionism before the Civil War. Grant County was home to Obadiah Jones, publisher of the abolitionist paper "The Herald of Freedom" as well as many who helped with the Underground Railroad including Nathan Coggeshall, Thomas Baldwin, and John Shugart.

Nathan Coggeshall was born February 14, 1813, in North Carolina. At the age of four years Nathan came with his parents to Wayne County, Indiana and later relocated to Grant County.

In 1896, at the age of 83, Coggeshall wrote a newspaper article for the Leader of Marion, Indiana about the Underground Railroad. Coggeshall described one route as running from Cabin Creek (a Free Black settlement) in Randolph County to several locations in Grant County.

Coggeshall states that from 1834 until 1840 very few African Americans escaped slavery through the area. By 1840, however, a regular route was established from Richmond through Grant County on up to Young's Prairie in Michigan. The activity of this route remained high until 1852. The last time Coggeshall himself helped 'conduct' anyone through the Underground Railroad was in 1855.

Coggeshall gave his wife much of the credit for the work done with the UGRR. He commends her for doing her full share in caring for the fugitives and in planning the ways and means of their escape.