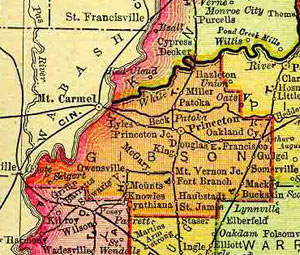 On June 20, 1790 Knox County, IN was formed in the Northwest Territory with Vincennes as the headquarters; the land now known as Gibson County, was part of the Vincennes Tract Treaty (of Ft Wayne) June 7, 1803 as well as part of the Treaty at Vincennes. Around 1810 Gibson County was formed, with the formal declaration taking place in 1813. County boundaries changed eleven times before the present boundaries were set in 1852.

James Cockrum, a resident of Oakland City, was born in 1799 in North Carolina. He purchased land in 1818 in Gibson County. Cockrum and his son William Monroe Cockrum, along with sympathizers in Warrick, Gibson, and Pike counties, aided enslaved blacks seeking freedom. James’ barn was used to hide fugitives. Cockrum died November 19, 1875.

William M. Cockrum wrote the History of the Underground Railroad in 1915, where he describes in detail the operations of the Underground Railroad in southwestern Indiana. While William was only a teenager at the time his father participated, in order to write the memoir, William interviewed and wrote the individuals working with his father during the 1850s.

Carithers, like many other abolitionists, left his home in the south because of his opposition to slavery. A Reformed Presbyterian, which adopted a strong stance against slavery, Carither’s work was captured in the 1855 Evansville Daily Journal:

RUNAWAY SLAVES CAUGHT – Mr. Barrett’s two slaves that left him on Saturday ngith last were caught yesterday by Sheriff Gavitt near Princeton. There were concealed in the house of a white man by the name of Carothors [sic] who was at first not disposed to surrender them. But finding the Sheriff fully authorized to take them, and not at all disposed to “do anything else” he bid his sable guest an affectionate “good bye” and made no forcible resistance.