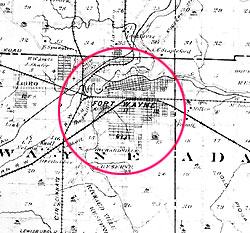 The town of Fort Wayne began as an eighteenth century trading post. The site, at the confluence of three rivers--the St. Joseph, the St. Mary's, and the Maumee--was a natural trading center and Fort Wayne became a very successful commercial settlement as the state developed. Fort Wayne grew more prosperous as new canals and railways were built, linking it to major trading centers in Illinois and Pennsylvania and attracting even more commerce and industry to town. Fort Wayne was very active in the Underground Railroad before the Civil War and many "lines" ran through the town. Some of the known conductors and supporters of the Underground Railroad in Fort Wayne were the Rev. Daniel W. Burroughs, a Fort Wayne Baptist preacher and publisher of a newspaper, and Alexander Rankin, a Prebyterian minister and the brother of Ohio abolitionist John Rankin.

The Alexander T. Rankin House was built c. 1841. It is a 1-½-story brick structure in the Greek Revival style, with a one-story wood frame addition on the east façade, added c.1855, with simplified Greek Revival details. Rankin, brother of famous UGRR conductor John Rankin of Ohio, founded abolition organizations in both southern Ohio and northern Indiana. His activities increased support for abolition and Underground Railroad activities in both states. Alexander Rankin is the only recorded individual who participated in the organization of both the Ohio and Indiana Antislavery Societies. The Rankin House is the only standing structure in Fort Wayne that is known to be connected to abolition or Underground Railroad activities.