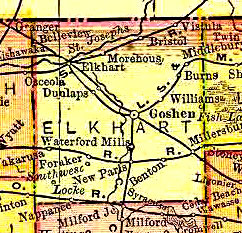 Trial of the Slave Catchers In April 1848, three slave catchers were tried for the crime of "riot" in Elkhart County Court House, Goshen, Indiana. The trial grew out of violence surrounding an attempted capture of an alleged fugitive slave in the village of Bristol in Elkhart County, just four miles South of the Michigan State line.

Joseph A. Graves, a tobacco farmer from Boone County, Kentucky, and two men were arrested in 1847 for allegedly with force and arms unlawfully and riotously assembling together to disturb the peace. In addition to this charge, they were accused of breaking down the door of Samuel Judson, the home at which fugitive slave Thomas Harris was staying.