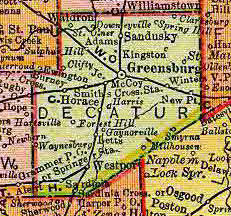 Decatur County, named for Commodore Stephen Decatur the 1804 hero of Tripoli who also fought heroically in the War of 1812, was active in the Underground Railroad in the Antebellum period. In the 1830s, local settlers founded the Decatur County Colonization Society for the purpose of sending freed slaves back to Africa. The Decatur County Anti-Slavery Society was also formed in 1835. By the 1840s, a few African-American families moved into the county and they joined the Underground Railroad efforts, helping fugitive slaves escape to Canada through the county.

In 1847, Caroline and her children escaped from owner George Ray of Trimble County, Kentucky, and made their way to Decatur County, Indiana where a series of events resulted in the arrest of Luther Donnell for aiding their escape. When the family reached Decatur County, Woodson Clark captured the family and confined them until he could arrange transportation south. The African American community enlisted the help of Luther Donnell, who worked to obtain a writ of habeas corpus to take possession of the family. Eventually the family was located and assisted via the Underground Railroad, by both the African American and White community, to Canada. Donnell was arrested under Indiana law and indicted for aiding Negroes to escape. The jury found him guilty. Then Ray brought suit in the U.S. Court for the recovery of the value of his slaves. He obtained a judgment for $3000 ($1500 for the value of the individuals plus court costs). In 1852, the Indiana Supreme Court overturned the criminal case verdict based on judicial error, that the Indiana law under which Donnell was prosecuted was unconstitutional. (Read entire story).