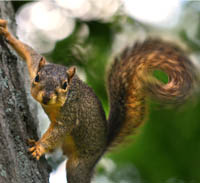 The fox squirrel (Sciurus niger), found throughout the state, is the largest of the four tree squirrel species in Indiana.

The other tree squirrels are:

Agile climbers that spend more time on the ground than other tree squirrel species. Typically, fox squirrels are more active during late mornings and mid-day compared to their gray squirrel cousins. They have a large vocabulary of barks and clucking sounds. Tree holes and cavities are remodeled for winter dens and often serve as nurseries for late winter litters. If existing trees lack cavities, leaf nests, or dreys, are built by cutting twigs with leaves attached and weaving them into warm waterproof shelters. Dreys may also be lined with moss, grass, or other insulating material. Dreys are more commonly used in Spring and Summer months, whereas tree cavities are highly preferred in winter.

Fox squirrels breed twice a year if conditions are right, in December/January and again in early summer. Fox squirrels average 3 pups per litter. Young squirrels born in early litters may breed and produce young of their own in their first year. Young are weaned in 8 to 12 weeks and soon become independent of the female. Squirrels produce fewer offspring than other rodent species but are more successful in rearing them.

Fox squirrels eat much the same foods as other tree squirrels:

When wild foods fail, such as an acorn mast failure, squirrel populations may decline in areas that experience such food shortages. However, fox squirrels in suburban areas have adapted to human food sources, such as bird feeders. Fox squirrels in rural agriculture areas typically live closer to corn, or other grain crops, and so are less dependent on natural food sources.

Squirrels don’t hibernate; however, to conserve energy, they are much less active during winter months. During this time, they depend on buried acorns and nuts, or bird feeders, and possibly waste grain for winter food. Many acorns buried in the fall are never found and later sprout into sapling trees. In addition to burying nuts, squirrels carry seeds and berries throughout their home-range serving as important seed dispersers.

In pre-settlement times, fox squirrels only occupied the savannah habitat found along the edges of prairie in what would later be northwest Indiana. As settlement, agriculture conversion, and timber harvest occurred, the fox squirrel expanded its range. It has been less than a century since this species moved into central and southern counties. This timber removal, which nearly spelled the end for gray squirrels, allowed fox squirrels to move into every corner of the state. Somewhere between solid virgin forests and complete timber removal, a favorable balance of cover enables fox squirrels to achieve optimal population levels. Recently, losses of large mature trees, and fencerow or hedgerow habitat, for increased crop production, or urban development, have caused fox squirrel population declines in some parts of the state.

Fox squirrels are notorious for raiding birdfeeders and gorging themselves. “Squirrel-proof” feeders are available, and some are affective.

Resident landowners and tenants can live-trap a fox squirrel that is causing damage on their own property without a permit from the DNR. The fox squirrel must be euthanized or released within the county of capture on property in which you have permission. In order to prevent the spread of disease, the DNR encourages homeowners to safely and humanely euthanize the fox squirrels, if possible. Live-traps can be purchased from hardware stores and garden centers. If you do not want to trap the squirrel yourself,  contact a licensed nuisance wild animal control operator.

If a squirrel is already in your chimney or attic, they will need to be removed from the building before entry points can be sealed. Numerous products are specifically labeled for use as squirrel repellents. In addition to these commercial products, homeowners could try natural repellents like chili or cayenne pepper in the attic or outside the home, or even use a strobe light in the attic. The most effective way to remove squirrels from buildings is to find out how they are getting in and out, and trap them there. It is best to set traps, live or kill, to catch them as they exit the building. Again, homeowners may want to contact a licensed nuisance wild animal control operator to conduct or assist in this effort. Once all the squirrels have been removed, permanently seal the entry point; tightly woven wire mesh (not chicken wire) will do the trick if covering a vent or chimney. Trim overhanging tree limbs to prevent easy access to your roof and attic.

Fox squirrels have been known to strip the bark from the upper branches of trees. This behavior typically occurs in early spring and early fall in response to their increased need for sodium. Sap, flowing up from the roots into the branches of trees in the spring and energy rich sap being produced in the fall, contain higher concentrations of sodium. Squirrels will peel back the thinner, more pliable bark, on the younger tree branches to get at the sodium-rich sap. Certain glues used in making plywood, as well as chemicals found in electric wire insulation, may also contain sodium and lead to squirrels chewing on these objects. Since the damage is directly related to squirrels needing more sodium (salt), the problem can often be mitigated by making alternative sources of salt more readily available. Small mineral/salt blocks or rings can be purchased from local pet supply stores and placed at the base of the trees being damaged or in the crooks of easily-accessible branches. Soak wooden stakes in salt water for 24 hours and then either place the stakes in the ground around the affected trees or wire them to the tree trunks.