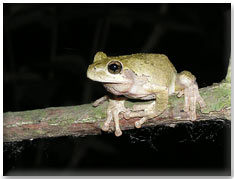 1 ¼ -2” (3.2-5.1cm). Color varies from green, brown, gray, to almost black. Bright yellow on underside of hind legs; whitish belly. Light spot beneath the eye. Enlarged toe pads. In the field, the two species can be distinguished only by their calls. 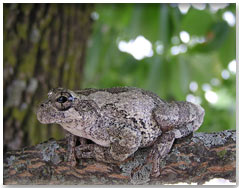 H. chrysocelis is found in southern Indiana, but reported as far north as Delaware Co.  Hyla versicolor typically occurs in the northern half of the state by may be found in parts of southern Indiana. .

Highly arboreal, found in trees or shrubs in woodlands and swamp forests, adapts well to farmlands and edges of cities.

Flooded ditches or fields, shallow wetlands including marshes or ponds.

Mid-April to end of July, males may call after breeding season is over when humidity is high.

Light colored, gray above and white below. Deposited in a cluster of 20-40 eggs, loosely attached near surface of water. Females may deposit up to 2,000 eggs. Hatch in 2-5 days.

Both species identical in appearance, cannot be distinguished in the field. ¼ inch in length, light yellow color, full-sized tadpoles have olive green body and may have brick red tail. Transform within two months, adult reaches maturity within two years.