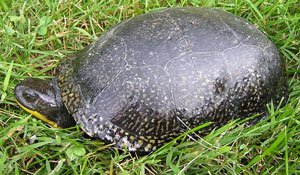 Fragmentation and loss of wetland habitats has lead to the population decline of the Blanding’s turtle. Adults moving between wetlands, and females seeking nesting sites, are vulnerable to road mortality. Conservation and management plans should address maintaining sufficient habitat both in and around ecosystems.

Are you a paddler interested in helping conserve and manage wildlife for future generations? Consider volunteering for the Paddlecraft Wildlife Index and reporting your Blanding's turtle sightings.

The Blanding’s turtle (Emydoidea blandingii) is a medium sized turtle with a smooth, dark, and moderately domed shell. The blackish shell is typically marked with scattered flecks and streaks that can range from tan to yellow in color. The bottom of the turtle’s shell (plastron) is yellowish and marked with darkened blotches along the edge of each section (scute). A hinge is present on the plastron. Another distinguishing characteristic of the Blanding’s turtle is its distinct yellow chin and throat, which can be observed when the turtle’s head is extended. Adults commonly reach lengths of 6 to 8 inches. 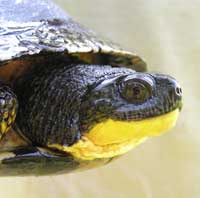 The continuous range of the Blanding’s turtle extends from west-central Nebraska eastward into the Great Lakes Region to southwestern Quebec and sections of western New York and Pennsylvania. Disjunct populations occur in the northern New England states and in Nova Scotia. Blanding’s turtles are uncommon in Indiana and are found primarily in the northern third of the state, with a few isolated records from the central portion of the state. They are currently listed as an endangered species in Indiana.

Blanding’s turtles prefer shallow, quiet waters and may be found in ponds, swamps, weedy marshes, sloughs, and backwaters of lakes.

Mating typically takes place in the spring, but may occur during the summer and into the fall. Females lay their eggs around June, and may travel over a half a mile to find a satisfactory nesting site. Using her back legs, the female constructs a hole into which she deposits 6 to 21 elliptical eggs. Hatchlings emerge around August or early September. Sexual maturity is reached at about 14 to 17 years of age.

Blanding’s turtles are primarily aquatic, but may venture onto land in search for another pond or marsh. On cool cloudless days these turtles may be seen basking on logs or other emergent objects in wetlands. During the summer’s heat Blanding’s turtles shift their activities to morning and evening hours, and may even burrow into the mud and aestivate in the event that their habitat dries up. Blanding’s turtles are not aggressive toward humans and rarely bite when handled.

There are very few predators of adult Blanding’s turtles, but raccoons, snakes, wading birds, and fish may consume juveniles and hatchlings. Eggs are taken by raccoons, skunks, and foxes.

The destruction of suitable habitat and road mortality are probably two of the more significant factors owing to the decline in Blanding’s turtle populations.